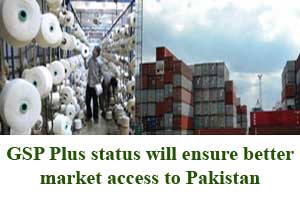 KARACHI: Industry leaders on Wednesday feared the country might lose its GSP+ status in the January 2018 review if it does not get certification on important international conventions related to human rights and environment.

The industry leaders shared these apprehensions during a meeting with Federal Secretary Ministry of Commerce, Muhammad Younus Dagha at the Pakistan Hosiery Manufacturers Association (PHMA) House.

The GSP+ status was granted by the European Union toPakistan in 2014 for a period of 10 years. It has to be reviewed every two years. The last review was in January 2016.

There are around 27 international conventions but the most sensitive ones relate to human rights and environment. Mr Dagha was hopeful that extension for a second term would be granted.

He said the government is already lobbying with EU member countries and in this connection a meeting was held with diplomats in Islamabad.

Responding to a point about lack of investment in treatment of industrial effluent, he said the federal government has alreadyreleased Rs7 billion for Karachi Combined Effluent Treatment Plant. The total cost of the plant is around Rs11bn and the balance would have to come from provincial government, he added. He hoped this will help meet environmental conditions.

Industry leaders also shared their concerns regarding rising cost of doing business, particularly on gas tariffs, as well as poor track record ofrelease offundsin various incentive schemes announced by the government over the past few years.

However, secretary commerce blamed exporters and industrialists for these woes. He said that most business houses and exporters siphoned off funds rather than going for upgradation of their respective industries.These funds are being diverted into real estate and stock exchange and due to this there is no innovation and efficiency in the management or increase in productivity of labour which was the main reason for high cost of doing business, he said according to sources.However he hinted at extension of further relief to exporters in days to come.