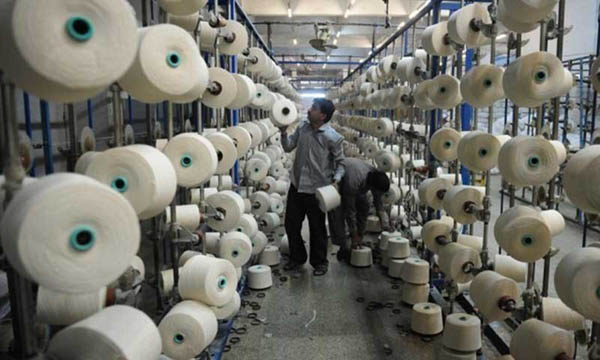 KARACHI: The All Pakistan Textile Mills Association (APTMA), commenting on the statement made by Commerce Secretary Muhammad Younus Dagha in the meeting held last week at Pakistan Hosiery Manufacturers Association that the textile industry is itself responsible for the continuous decline in exports, said that the Pakistani textile exports have shown decline during the last four years because of the cost of doing business which is the highest in the region.

He said that the textile industry has been hit hard due to the high cost of energy, both gas and electricity resulting in making Pakistan’s exports uncompetitive in the global market as the cost of production of both gas and electricity is about 30 percent higher than the regionally competing countries like Bangladesh, India and Vietnam. The government should remove the levy of Gas Infrastructure Development Cess (GIDC) on gas. He further demanded that the government should provide gas at the regionally competitive rate of Rs 400/MMBTU as was earlier announced by ECC in November 2016 but was not implemented.

He said that both the spinning and weaving sectors are backbone of the textile value chain, and have faced the brunt of high cost of doing business, which has made them unviable throughout the country. Today spinning industry is incurring heavy losses by selling yarn below cost. The   production of yarn and fabric is substantially more than the local consumption; therefore, their exports must be encouraged.

He further requested that the following measures be taken on immediate basis to improve the efficiency and viability of textile industry, like expeditious payment of long outstanding sales tax refunds and other refunds to address the liquidity issue, to check large scale influx of imported yarn and fabrics in the country to save the domestic industry. Free Trade Agreements and Preferential Trade Agreements be reviewed and revisited in such a way that the exports of Pakistani goods to those countries be increased.

He also demanded the government to encourage investment in spinning, weaving and finishing sectors in such a manner that maximum cotton be converted into yarn and further downstream value added products as it will not only facilitate the farmers and the spinning industry but would also help the whole textile chain and the national economy in general. He said that few years back we had achieved production of 15 million bales of cotton, which fell down to 10 million bales. Now we must take necessary steps to achieve 15 million bales of cotton production or even increase it further to 20 million bales every year. He referred the investment boom seen during the years 2003-2008 and BMR of more than 7 billion US$ by the business community in the entire textile chain. He added that due to the lucrative investment policy in the above referred period the total installed capacity of the textile industry and the production of basic textile products were increased by more than 40 percent.

He said that the country has already entered in an era of de-industrialisation where industries are closing. In 2005 the share of manufacturing in the GDP was 19%, which has now fallen to 13%. Large scale closure of textile spinning mills has already taken place resulting in drastic increase in unemployment as well as reduction in consumption of locally produced cotton. This will hurt both the manufacturing as well as the agriculture sectors of the economy. He added that almost 140 textile mills have already closed their operation and about one million workers have lost their jobs and another 75 to 80 mills are on the verge of closure, which will add to the unemployment figure by another 0.5 million labour force employed in the textile industry. He further said that due to the closure of about 140 mills and the various mills operating under capacity, Pakistan’s textile exports is suffering a loss of more than 4 billion US$ per annum.

Zahid Mazhar said that the trade deficit for the last fiscal year was recorded at an all-time high at US$ 32.58 Billion, imports at $53 billion while exports were recorded at merely $20.45 billion, the lowest after 2009-10. He requested the Prime Minister to place the revival of the economy and the textile industry on the top of his agenda as the government has to pay $7,432 million including $1,595 million interest in 2017 and $ 38.224 billion and Rs 15.883 trillion against external and domestic public debt respectively including principal amount and interest in the next seven years and only the increase in exports can help to pay the above debts otherwise we have to take fresh loans to service the principal and interest of the loans we have already taken.

He said that the Textile Industry of Pakistan is capable enough to bring the economy out of the current disastrous condition. He hoped that the new Prime Minister Shahid Khaqan Abbasi and his cabinet would take immediate steps to stop the drastic decline in exports during last four years, as any further negligence or delay will take the economy to a point of no return.

He urged the prime minister to issue instructions to the concerned authorities to implement the Textile Package of Rs 180 Billion announced earlier this year for the support of exports and the textile industry. He demanded that the Notification for release of refund under Drawback of Duties and Taxes Order from July 01, 2017 to June 30, 2018 be issued without the condition of growth in exports of 10% in 2017-18 as compared to 2016-17 and payment under this package be released without any further delay. This must be treated as the first step to check de-industrialisation and the dwindling exports of the country. He clarified that the duty drawback paid under the Textile Package is not an incentive rather it is the refund of local taxes and levies paid by the exporters.

He also suggested the new Prime Minster as well as the Minister of Commerce and Textiles to avail the opportunity of being at the helm of affairs and to remain engaged with APTMA for arriving at workable solutions in order to solve the problems being faced by the Textile Industry.