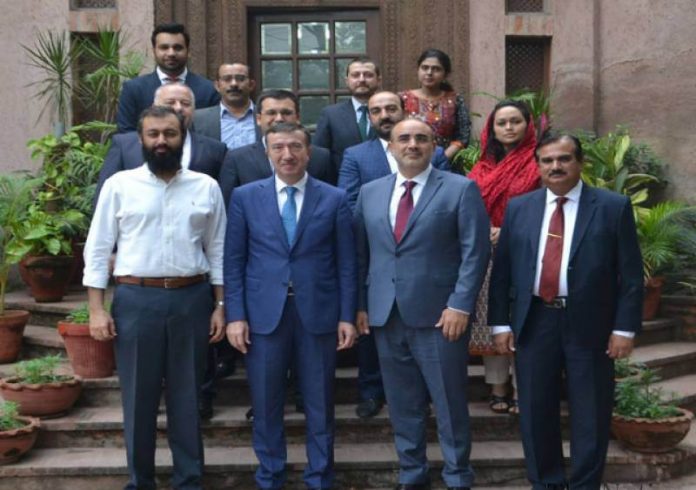 Celek expressed his gratitude for the generosity and reaffirmed the close ties between Pakistan and Turkey, stating that Pakistan and Turkey were “two countries, one nation”. He stated that there was a need to build on this mutual love and respect by getting to know each other better. “Businessmen from both countries don’t fully know the potential in each other, and this could only be rectified by having further meetings between government bodies and business people”, he added.

Turkish embassy and consulate can bridge the gap between the two countries and can facilitate further economic cooperation, he said. He emphasized that the business associations of both countries can play an important role in this regard. Hasan Ali Celek also named Turkish institutions which can help Pakistani investors such as Kosgeb, an office that supports small and medium enterprises (SMEs). Similarly, he named Tuvitak, a centre for science and technology projects, which could also be of use to Pakistani investors.

CEO PBIT Burana reaffirmed Pakistan’s close ties with Turkey. He told the delegation that PBIT was planning to conduct a roadshow in Istanbul in the near future as Pakistan could learn a lot from Turkey in various sectors such as meat, livestock and healthcare. CEO PBIT stated that Pakistan provided ample opportunities for Turkish investors especially in Halal meat sector, after which the Deputy Minister Celek encouraged Pakistani investors to get in touch with CMIICI and TSR, organizations that facilitate and set standards for Halal food.

Burana highlighted some key opportunities for Turkish investors in areas such as corporate farming, healthcare and tourism. The two sides expressed their keenness to move forward, PBIT would actively work with all stakeholders in Turkey to enhance the B2B cooperation and interactions.

Import duty on eatable, luxury items raised by up to 50pc