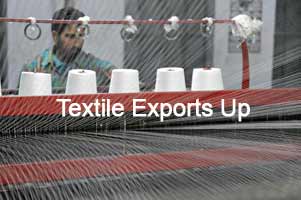 ISLAMABAD: Exports grew nearly 15 per cent year-on-year in December 2017, raising hopes about a revival in the overseas sales of Pakistani goods.

The upward trend in exports will contribute towards bridging the deficit in current account, which is underpressure because ofrisingoil prices and growing imports of other fuels and machinery.

In absolute terms, exports edged up to $1.97 billion in December from $1.72bn a year ago, data released by the Pakistan Bureau of Statistics showed on Wednesday.

In the first half of the current nscal year, export proceeds recorded an annual growth of11.24pc to $11bn.

Talking to Dawn, Commerce Secretary Younus Dagha said exports have been increasing since last June. They increased 12.3pc and 14.8pc in November and December, respectively.

The increase in imports, which was 37pc in January and July, came down to 10pc in December.

This is despite the fact that crude oil prices went up from $47 per barrel in July to $67 per barrel in December, showing an increase of 43pc, he said.

Excluding fuel imports, whichregistered an increase of almost 30pc, the rest of imports have shown only 1pc rise, the secretary said.

He said imports of non-oil and non-essential consumer goods are expected to remain under control due to import rationalisation initiatives. However, rising oil prices and higher machinery imports remain a challenge for the balance of trade, he added.

Imports of mobile phones and apparatuses also witnessed tremendous growth during the period under review.

The merchandise trade deficit swelled nearly 25pc to $17.96bn in the first six months of this fiscal year. It rose 7.12pc year-on-year in December to $2.94bn.

The last fiscal year saw the trade deficit rise to an all-time high of $32.58bn, representing year-onyear growth of 37pc. The country`s annual trade deficit was $20.44bn in 2013. It has been continuously on the rise since then.