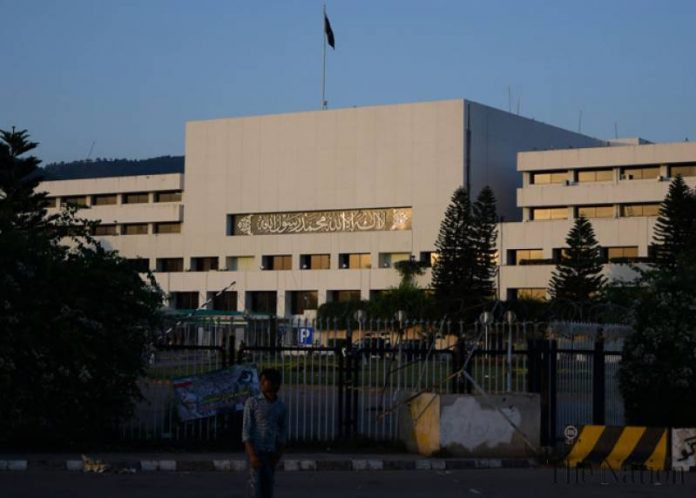 ISLAMABAD –  The business community has proposed to the government to reduce the cost of production to enhance tumbling exports to contain the widening current account deficit of the country.

Representatives of the business community on Friday gave their input to the National Assembly Standing Committee on Finance and Revenue, which met under the chair of MNA Qaiser Ahmad Sheikh. The committee deferred the rest of the meeting’s agenda and discussed consensus of political parties on the economic policy. Sheikh said that currently, the business community was facing several issues such as the cost of business, refund blockage, high interest on agriculture lending and increase in corruption. He said that the government should manage to utilise the skills of the youth, which was high in ratio, approximately 60 percent. He also said that bureaucratic reforms should be made to enhance the performance of government institutions. He was of the opinion that the performance of foreign trade attaches should be evaluated by the government to achieve their objectives.

Federation of Pakistan Chamber of Commerce and Industry (FPCCI) President Zubair Tufail said that exports could increase by 10 to 12 percent during the ongoing financial year if the government reduced the electricity and gas tariffs. “A delegation of the business community recently met with Prime Minister Shahid Khaqan Abbasi to give suggestions to enhance exports. We had demanded to reduce the power tariff by Rs3 per unit to Rs9 per unit besides reducing gas infrastructure development cess,” he said.

“The prime minister was concerned to increase the export volume up to $25 billion within six months; however, he was informed that it could be possible in the next one-and-half-year. Exports could be increased up to $25 billion if the government accepted our proposals and withdraw the recently imposed regulatory duty (RD) on imported commodities,” he said.

Arif Habib, a leading businessman, drew the attention of the committee towards the growing current account deficit, and the need for long and short-term policies. He said that the government should attract overseas Pakistani businessmen for investment in Pakistan. Four sectors of economy – agriculture, industry, construction, and information technology – need immediate attention, he said. The businessmen were of the opinion that the government should provide low rate energy to industries for bringing them to regional competition of export.

Lahore Chamber of Commerce & Industry (LCCI) President Javed Malik and LCCI former president Mian Anjum Nisar were of the opinion that the government should withdraw regulatory duty, which was recently imposed on different products by issuing an SRO. They said that this kind of unrealistic measures will attract the public towards smuggling. They were also of the suggestion that input tax adjustment/refund on packing material should be allowed to exporter/exporter houses or an alternative.

Ministry of Finance Parliamentary Secretary Rana Muhammad Afzal Khan assured the committee that the Federal Board of Revenue (FBR) will arrange a meeting today with businessmen for resolving the issue of regulatory duty. The committee recommended that another meeting of the committee would be convened to formulate the discussed points about the economic policy. The committee also decided that leading industrialists, businessmen, and stakeholders from the stock exchange would be called at its meeting.

The committee recommended to the FBR to sit with the businessmen for resolving the problems being faced by them owing to regulatory and anti-dumping duty, imposed by the government on the import of different items, which were on way and already reached in Pakistan.