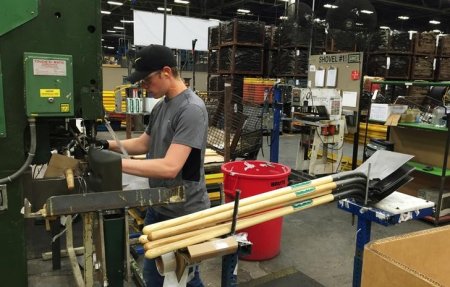 WASHINGTON: A measure of US factory activity retreated from a 13-1/2-year high in October as some of the boost from hurricane-related supply disruptions faded, but continued to point to strengthening manufacturing conditions.

Other data on Wednesday showed a surge in private sector hiring in October, indicating that job growth rebounded last month after being depressed in September as hurricanes Harvey and Irma left some workers temporarily unemployed.

Manufacturing and labour strength likely keep the Federal Reserve on track to increase interest rates in December. The US central bank is not expected to raise rates when policymakers conclude a two-day meeting later on Wednesday.

The Institute for Supply Management (ISM) said its index of national factory activity slipped to a reading of 58.7 last month from 60.8 in September, which was the highest since May 2004. A reading above 50 in the ISM index indicates growth in manufacturing, which accounts for about 12 percent of the US economy.

“A good portion of the weakness this month was in supplier delivery times, which was a leader of strength the prior month,” said Lindsey Piegza. “From the Fed’s perspective, continued improvement in domestic production offers additional support for an end-of-the-year rate hike.”

September’s jump in the index was driven by supply chain disruptions, especially in the chemical products sector. The supply bottlenecks, which also pushed up prices of raw materials, resulted in a longer delivery times.

Longer supplier delivery times are normally associated with increased activity, which is a positive contribution to the ISM index. The ISM’s supplier deliveries sub-index fell to 61.4 last month after soaring to 64.4 in September.

The survey’s prices paid sub-index dropped to 68.5 after racing to 71.5 in September, which was the highest reading since May 2011. While other components of the ISM index, including production, new orders and employment also fell last month, they remained at lofty levels.

Manufacturing is being supported by a strengthening global economy and weakening US dollar. Sixteen of the 18 manufacturing industries reported growth in October.

Nearly all industries last month reported that hurricanes Harvey and Irma, which struck Texas and Florida in late August and early September, continued to have an impact on supplies and raw material costs. The survey’s measure of raw material inventories contracted in October.

The ADP report, which is jointly produced with Moody’s Analytics, is not a good predictor of the private payrolls component of the employment report. It did, however, support expectations of a sharp rebound in employment last month after nonfarm payrolls declined by 33,000 jobs in September.

A third report from the Commerce Department showed construction spending increased 0.3 percent to $1.22 trillion as a jump in public construction outlays offset the third straight monthly decline in investment in private projects.

The data poses a small upside risk to the government’s gross domestic product estimate for the third quarter published last week. The advance estimate put economic growth at a 3.0 percent annualized rate in the July-September quarter, with both residential and nonresidential structures subtracting from output.—Reuters

Is It Safe to Use Makeup Testers in Cosmetics Stores?