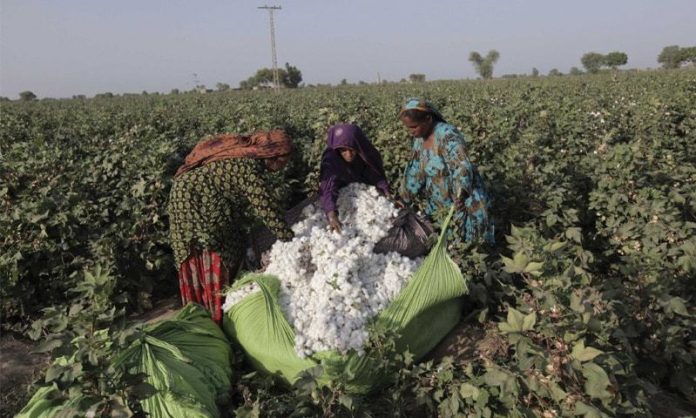 KARACHI: Pakistani traders have finalized deals for the import of over one million cotton bales due to lower quality crop output.

Although, initial crop estimates suggest that the cotton crop during this season will be higher than previous season, however the crop quality is not improved and even lower than last year’s due to heat waves.

“Cotton sowing was higher, but the crop has been badly damaged due to temperature and premature crop comes to market,” traders said and added that some 12 million cotton bales production is expected this year compared to 10.7 million achieved last year.

Ahsan ul Haq, Chairman, Cotton Ginners Forum said initially, ahead of low quality cotton production estimates, deals for the import of 1.2 million quality cotton bales have been finalized to meet the domestic requirements. Most of the deals have been settled by textile millers, he added.

He said most of cotton will be imported from US, Brazil and West African countries and more cotton import deals are in process to avoid shortage.

Talking about the import from India, he said Pakistani traders and millers are reluctant to import raw cotton from India due to strict conditions imposed by Indian government.

He said ahead of expected lower shortfall, cotton prices in the domestic market are on increase, rising by Rs 300 per maund to reach 3-month high of Rs 6,800 per maund.

Ahsan said cotton prices are likely to remain unstable due to uncertain cotton crop. The federal government’s cotton crop target of 12.6 million bales for the current year is unlikely to be achieved because of unfavorable weather conditions, he added.

Naseem Usman, a leading cotton trader, also confirmed that Pakistani millers and traders have hundreds of bales cotton import deals with foreign sellers to fulfill their demands. As per our estimates, deals for import of some 1.2 to 1.5 million cotton bales have so far been finalized, he added.

Failure in achieving targets: FBR to penalize 250 officers for poor...