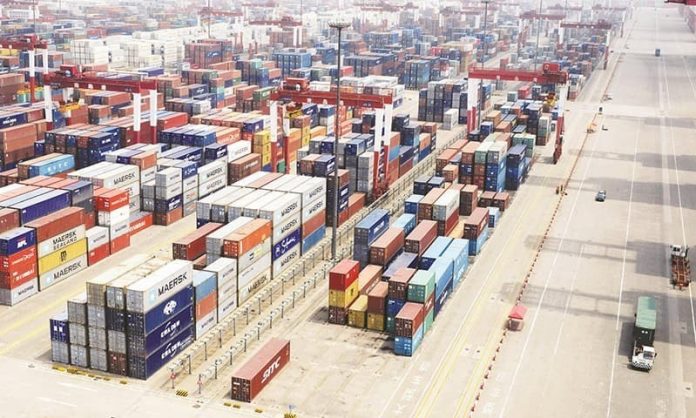 ISLAMABAD: Exports of textile and clothing recorded a growth of over seven per cent year-on-year in July-October, the Pakistan Bureau of Statistics (PBS) reported on Tuesday.

The increase was mainly led by the exports of value-added products, data showed.

The Ministry of Commerce claims the revival of growth in the export sector is due to a cash subsidy offered to exporters under the prime minister`s incentives package and the payment of sales tax refunds.

Data shows exports from the sector increased to $4.4 billion in JulyOctober against $4.07bn over the corresponding period last year. The share of the textile and clothing sectorinoverallexportproceedsstoodat 62.4pc during the period under review.

Exports of readymade garments edged up 14.8pc in the first four months in value and 12pc in quantity.

Similarly, exports of knitwearincreased 10.6pc in value and 11pc in quantity during the period under review.

A similar trend was recorded in exports of bed-wear, which went up 5.5pc in value. However, these exports fell 0.87pc in quantity during the period under review. Exports of towels posted a negative growth of 0.08pc in value.

In the category of primary commodities, exports of cotton yarn witnessed a year-on-year increase of 5.04pc. There was a decline of 100pc in the exports of yarn other than cotton.

The import bill of food products rose 20.2pc to $2.19bn mainly because of the increased arrival of eatable products, including tea, spices, sugar, palm oil and soybean oil.

Imports of the petroleum group went up 39.46pc to $4.43bn in JulyOctober. A surge in imports of raw and petroleum products was witnessed during the period under review. At the same time, growth also took place in liquefied natural gas imports.

The import bill of machinery fell 1.38pc to $3.67bn. The decline was mainly led by a drop in imports of power-generating machinery, office machinery and construction and mining machinery.

In contrast, a surge in imports of mobile phones and apparatus was recorded during the period under review. Imports of textile machinery and agriculture machinery also witnessed a growth in the first four months of the current fiscal year.