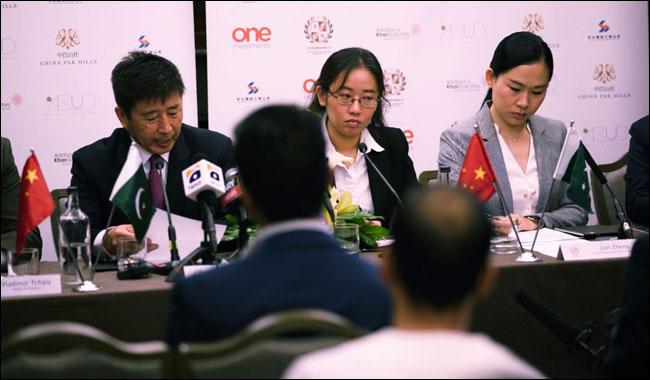 LONDON: A leading Chinese investment company here announced to invest $500 million in Gwadar in first phase of project aimed at building homes for around 500,000 incoming Chinese professionals expected in Gwadar by 2023.

Jian Zheng of China Pak Investment Corporation spoke about the relationship with TIEC and the opportunity that the One Belt One Road investment by the Chinese government offers Pakistan and particularly the Port City of Gwadar. He said that China Pak Hills is an unprecedented development project.

Vladimir Tchaly spoke about the vision and creativity that the design team offer and how these will be translated into a contemporary development for a community of over 10,000 residents.

Stuart Reid, COO of One Investments Ltd, said of the landmark project: “China Pak Hills is a unique and exciting opportunity. The level of investment and commitment made by the Chinese government in the CPEC guarantees that Gwadar is going to be one of the most important trading and access points in the World. Its geographic position, combined with the infrastructure being created through the CPEC means that it can only grow exponentially.”

Zeeshan Shah, CEO of ONE Investments who starred in the 2013 version of the Apprentice and made national headlines, told The News that he had himself visited seven times in two years and found the area most peaceful and conducive for investment. He said that exit and entry points of the whole Gwadar region are controlled by Pakistan army, providing top order security and safety. “Gwadar has everything that an investor needs. It’s just another world where order exists and everyone working and living there will have fool proof security around them.

He said: “Spanning over 10 million sqft across 3 phases, China Pak Hills will be the first development of its kind in Gwadar. A mixed-use gated development tailor-made for Chinese professionals in Gwadar, it will offer an all-encompassing lifestyle to live, work and play, with a host of facilities that will set the benchmark of future developments. The company building the model city has an annual turnover of around $10 billion. The aim of this project is to build infrastructure for the incoming influx of Pakistani and Chinese professionals. Growth in Gwadar will go up massively and it will need strong social infrastructure to cater for this need.”

Zeeshan Shah gave example of a Chinese city called Shenzhen which was a poor village in 1979 but it was developed on the Gwadr model. He said the population of this town is now over 30 million, its annual growth stands at $250 million. China is doing the same in Gwadar, its population will be go up by half a million in next six years. “Gwadar offers tremendous opportunities. Once completed, it will become the most important port city in the World from both an economic and geopolitical perspective.”

The announcement hails an exciting new phase in the development of the port of Gwadar, the ‘Gateway City’ to the $62 billion China Pakistan Economic Corridor (CPEC), the largest unilateral foreign direct investment from one nation into another. The CPEC is set to catapult Pakistan’s stature as a key global trade and economic hub and includes a bouquet of projects currently under construction that will not only improve Pakistan’s infrastructure, but will deepen the economic and political ties between China and Pakistan.

The China Pak Investment Corporation acquired GDA approved International Port City, which is under application in GDA to be renamed to China Pak Hills.