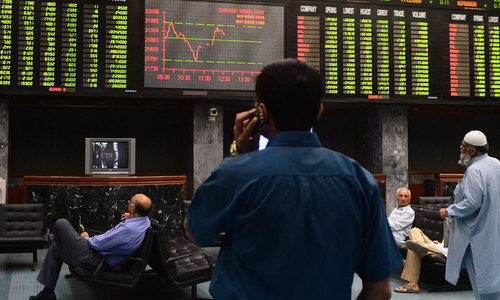 KARACHI: Trading hours at the Pakistan Stock Exchange (PSX) were cut short by one hour and 20 minutes on Wednesday as the market came to a halt at 2:10pm due to a `technical fault`.

`The PSX is subject to such technical issues as much as any other global market,` he said while categorically denying any mismanagement or hanky-panky.

A source said the market`s Exposure Management System had gone haywire. The system was unable to calculate, or was miscalculating, margins on open market positions. It started from the future market contracts and leaked on to the ready market.

Some people termed it a reaction from the exchange`s department concerned to the strong protest by stakeholders at the PSX annual general meeting (AGM) held on Oct 24.

A few brokers spoke loudly at the AGM about `data leakage` and demanded that it must be plugged.

With Chinese directors present on the occasion, several stakeholders said they suspected regular `data leakage` or `position leakage` of parties during or after tradinghours.

One stakeholder said that it was known in the market by `calendar`, meaning the position of various parties.

`Those who wanted to know the `calendar` got the information by paying a certain sum of money,` said a market participant who asked not to be named.