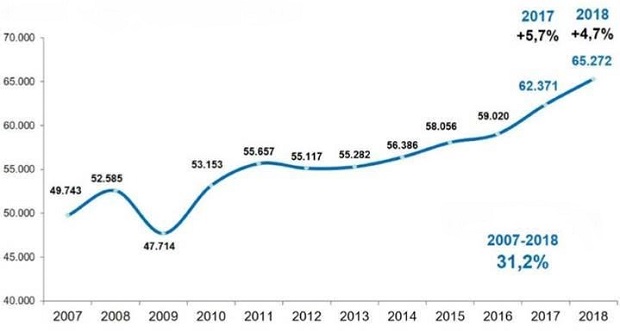 Spanish chemical companies’ sales are set to increase in 2017 by 5.7%, year on year, to €62.4bn, as domestic consumption and the global recovery fuelled demand, the country’s chemical trade group FEIQUE said on Monday.

Sales during 2018 are forecast to grow by 4.7%, year on year, to €65.3bn, making chemicals one of the best manufacturing sectors in the Spanish economy which already accounts for 12.8% of GDP.

Out of that figure, FEIQUE still expects exports to play a key role in 2018, increasing by 4.1% compared to this year totalling €36.3bn out of the total sales of €65.3bn.

According to figures from FEIQUE, while the average industrial activity is still more than 20% below the pre-crisis levels, chemicals have accumulated growth of more than 16%.

The trade group did not mention on Monday the political crisis which has engulfed the north east region of Catalonia over the past weeks, which according to the national government is set to affect economic output as the region accounts for more than 20% of Spain’s GDP.

Anton Valero, the trade group’s president, preferred to focus on other challenges. In a common cry with the Spanish chemicals shared by trade unions and corporates alike, Valero said the high energy costs companies in the sector are putting a drag on its global competitiveness, and called for an overhaul of the country’s support for renewable energies.

While public subsidies for renewables mostly came to an end following the financial crisis which hit the country hard post-2008, renewable energies are still being subsidised by a general tax paid by all energy consumers – corporates and households – in their bills, making Spain one of the EU countries where those costs are highest.