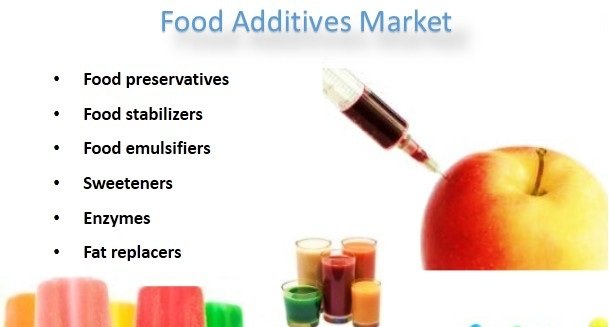 Food additives are substance added to food to enhance its taste, quality, appearance, and preserve the food from bacterial effects. Food additives are broadly categorized as acidulents, acidity regulator, antioxidants, antifoaming & foaming agents, emulsifiers, flavor enhancers, color retention agents, stabilizer, and sweeteners. Growing demand for convenience and organic food in North America and Europe is expected to fuel growth of the market for food additives. Increasing awareness about foodborne diseases that can be kept at bay by effective use of additives and increasing health consciousness among the general populace in Europe and North America is expected to boost growth of the market. This is further augmented by increasing consumer inclination towards natural food ingredients such as natural flavoring agents, organic preservatives, natural coloring, and stevia-based sweeteners. Natural food additives segment is expected to dominate the market through 2025, according to the stats provided by Coherent Market Insights.

Rampant urbanization and increasing disposable income in Asia Pacific is expected to boost the market for food additives. Also, changing lifestyles characterized by increasing consumption of ready-to-eat food products and increasing number of women workforce tends is increasing consumption of convenience food, and in turn food additives extensively used in them. As per statistics released by the India Brand Equity Foundation (IBEF)—a Trust established by the Department of Commerce, Ministry of Commerce and Industry, Government of India—the Indian food processing industry is expected to reach US$ 130 billion by 2024. This creates a highly conducive environment for growth of the food additives market, buoyed by rapid economic growth in emerging economies of India and China.

Stringent government regulations is expected to be one of the key challenges for food preservatives market. For instance, on June 20, 2016, The Government of India’s (GOI) Food Safety and Standards Authority of India (FSSAI), banned use of potassium bromate and cyclamates in food. Moreover, The Government of the Hong Kong Special Administrative Region, on July 1, 2008, introduced new regulations to control the use of preservatives and antioxidants in food. Also, the National Health and Family Planning Committee of China introduced the National Food Safety Standard for Food Additive Use (GB2760-2014), which was implemented on May 24, 2015. On July 14, 2014, the European Union (EU) implemented the European Food Information to Consumers Regulation No 1169/2011 (FIC). On April 1, 2016, U.S. Food & Drug Administration, introduced a regulation against use of perfluoroalkyl ethyl containing food contact substances such as oil and water repellants for paper and paperboard for use in contact with aqueous and fatty.

North America, followed by Europe and Asia Pacific, respectively, accounted for major share in the global Food Additives market in 2016 and the trend is projected to remain the same over the forecast period. In 2016, North America accounted for 33.10% share, followed by Europe with 28.10% share. The growing demand for meat and confectionery products in North America due to hectic lifestyle, increased urbanization and growing retail and hospitality sector is in turn expected to drive growth of the global food additives market over the forecast period. According to a study conducted by Coherent Market Insights, the global meat, poultry & sea food market is expected to witness a CAGR of 4.47% from 2017 to 2025, which creates a highly conducive environment for growth of the global food additives market.