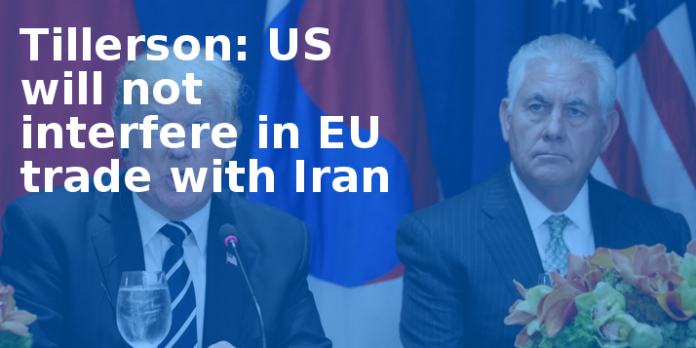 European Union leaders in Brussels on Thursday highlighted the need to protect their companies and investors dealing with Iran from any adverse effects should Washington reinstate sanctions against Iran, officials said.`The president`s been pretty clear that it`s not his intent to interfere with business deals that the Europeans may have under way with Iran,` Tillerson told the Journal in an interview Thursday.

`He`s said it clearly: `Thats fine. You guys do what you want to do.“ Trump last week adopted a harsh new approach to Iran by refusing to certify its compliance with the nuclear deal struck with the United States and five other powers including Britain, France and Germany.

The Republican presidentgave Congress 60 days to decide whether to reimpose economic sanctions on Iran, lifted underthe pact in exchange for scaling down a program the West fears was aimed at building a nuclear bomb, something Tehran denies.

Trump has criticised the nuclear accord as `the worst deal ever` and has vowed to withdraw if Congress and European allies do not address his problems with it. Tillerson`s comments appeared aimed at reassuring the Europeans that Washington is not trying to pressure them into avoiding business with Iran.

`We`ve been working with the Europeans for six months,Tillerson said. `They have been brought along with this same thought process. It doesn`t mean that they necessarily agree entirely with it. … Now we will start a more formalised process with them now that the policy`s been adopted.` The Journal said Tillerson would not discuss the multibillion-dollar deals reached by Boeing Co under the 2015 accord. Boeing, which was the first major US company to announce a major business venture with Iran, last year agreed to sell dozens of commercial planes to Tehran. -Reuters

Chinese company to invest $500m in Gwadar to build homes