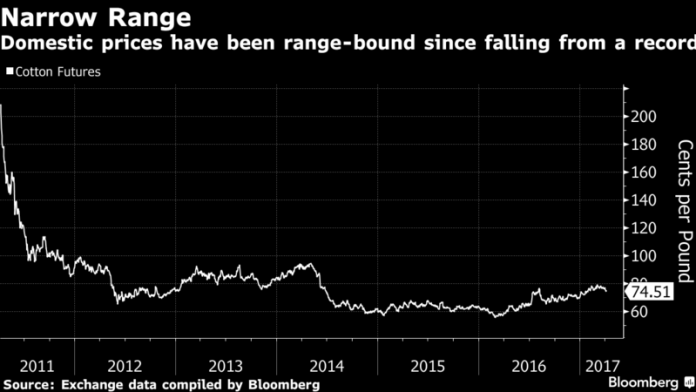 “There were reports of frost in west Texas which could reduce the crop size there but it’s not really clear how much damage there was,” said Gabriel Crivorot, analyst at Societe Generale in New York.

“It was probably nothing major,” Crivorot added.

On Monday, the US Department of Agriculture’s weekly crop progress report showed 46 percent of cotton crop was harvested in the United States by the week ended Oct. 29, up from 37 percent in the previous week.

It rated 55 percent of the US cotton crop in good to excellent condition, slightly down from 56 percent a week ago, the report said. Total futures market volume fell by 1,659 to 24,920 lots. Data showed total open interest gained 1,056 to 232,412 contracts in the previous session.

Certificated cotton stocks deliverable as of Oct. 30 totaled 2,031 480-lb bales, unchanged from 2,031 in the previous session. The dollar index was unchanged. The Thomson Reuters CoreCommodity CRB Index, which tracks 19 commodities, was up 0.02 percent.—Reuter