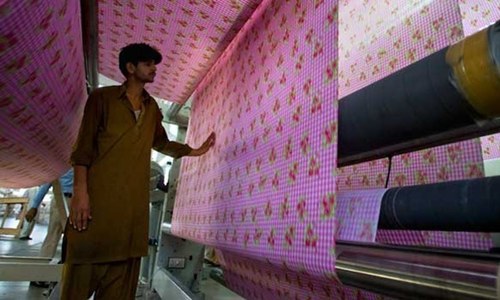 ISLAMABAD: Pakistan`s exports of textile and clothing products posted nearly eight per cent growth year-on-year to $3.25 billion in the first quarter of 2017-18, the Pakistan Bureau of Statistics (PBS) reported on Monday.

One of the reasons for the revival in textile and clothing exports is the cash subsidy offered under the prime minister`s exports enhancement package.

The main driver of growth was the value-added textile sector. Exports of ready-made garments went up 16pc in the first quarter in value and 19pc inquantity. Similarly,exportsof knitwearedgedup 9pc in value and 15pc in quantity during the period under review.

Exports of bedwear went up 7.1pc in value and 1.8pc in quantity while those of towels posted a paltry growth of 0.91pc in value.

In the category of primary commodities, exports of cotton yarn witnessed a year-on-year increase of 4.5pc while those of yarn other than cotton recorded a rise of 7.67pc.

The import bill of machinery, oil and eatables increased 17.5pc to $7.56bn in July-September.

The import bill of food products rose 19.3pc to $1.62bn because of growing imports of tea, spices, sugar, soybean oil and pulses.

Oil imports went up 34.45pc to $3.16bn in JulySeptember. Imports of machinery also grew mainly because more mobile phone sets arrived in the country in July-September.

However, imports of power-generating machinery and office and construction machinery fell during the period under review. Imports of textile machinery witnessed a growth of 26.5pc in the first quarter.