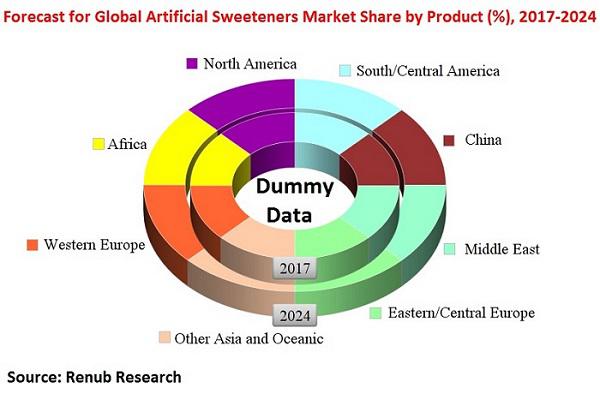 It does not mean that sugar is out of trend. The U.S. Department of Agriculture survey recently found that the average American consumes equivalent of 160 pounds of sugar a year, a 30 % increase over 1980.

This is because in large part sugar additives is used in so many things to prepared foods. Consumption in the United Kingdom is even higher at 165 pounds, while other European countries range from 110 to 145 pounds per year. The sales of high intensity sweeteners (HIS), sugar and sweeteners rise together, instead of one type displacing another.

The new low-sugar beverages, dairy products and snack foods are proliferating. Although stores such as Whole Foods in the US do not stock products that contain artificial sweeteners, a majority of consumers have welcomed these additives into their diets, particularly in soft drinks.

On the basis of products, the artificial sweeteners market is segmented on Aspartame, Sucralose, Saccharin, Neotame, Acesulfame Potassium (ACE-K), Stevia and Cyclamate. Artificial Sweetener is actively used in several food and beverages products and other applications such as in the formulations of medicines just to enhance the taste and flavor of the products without adding any calorie to them.

Artificial sweeteners market is also segmented on the basis of its applications in Food and Beverages, Pharmaceuticals, Tabletops and Others. Artificial sweetener is widely used in food and beverages products to provide required sweetness and texture to the final product while in pharmaceutical industry; it is used in the formulation of syrups and tablets.