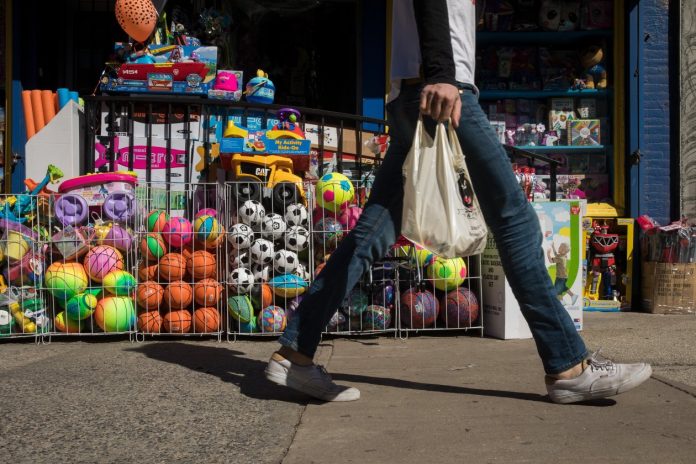 “The blight of plastic bags takes a devastating toll on our streets, our water and our natural resources,” the Democratic governor said in a statement Monday.

California in 2014 became the first state to implement such a ban and other cities and states have followed suit with their own bans or by adding fees to single-use plastic bags. New York would be one of the largest areas to do so. The proposal allows for several exceptions, including plastic-bag use for certain foods like fish or bulk fruit.

The measure marks a new position for Mr. Cuomo on an issue that has polarized New York lawmakers. Last year, he signed a bill that blocked New York City from implementing a plastic-bag levy. The fee was backed by New York City Mayor Bill de Blasio, a Democrat, and the City Council.

City lawmakers argued that the fee would help the environment by deterring plastic-bag use, but state lawmakers stopped it, saying it would nickel and dime low-income people and senior citizens.

When Mr. Cuomo signed the measure last year he said he would impanel a task force to study the issue. He said Monday he was following the panel’s recommendations.

“Bans tried elsewhere have made it harder for families to pay for groceries, while incentivizing shoppers to use bags that are worse for the environment than 100-percent recyclable, highly reused plastic retail bags,” he said.

Mr. Cuomo’s proposal Monday is the latest in a string of liberal moves he has made since actress Cynthia Nixon jumped into the Democratic primary against him. Last week, he used executive order to grant all parolees in New York the right to vote.

Ms. Nixon and her supporters have taken credit for pulling the more moderate governor to the left.

Liberal advocates expressed skepticism. “This looks like election-year, Earth Day politics,” said City Councilman Brad Lander, the Democrat who sponsored the city’s plastic-bag fee law. He said he doubts the bill will pass, adding that the governor should have backed the city’s fee.

“The governor’s long record of progressive accomplishment is irrefutable,” said Cuomo campaign spokeswoman Abbey Fashouer. “Any claims otherwise should be seen for what they are: baseless election-year rhetoric.

The bill requires legislative approval to become law. Republicans, who have opposed plastic-bag rules, control the Senate, but their one-person majority is precarious.

Democrats have been more supportive of moves against plastic bags.

If Democrats win a special election on Tuesday in Westchester County they would have a numerical majority—but that hinges on reuniting with Sen. Simcha Felder, a Brooklyn Democrat who caucuses with Republicans.